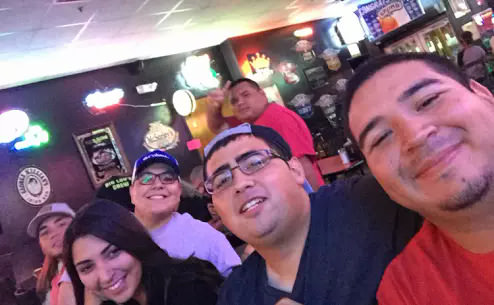 “The world’s greatest achievers have been those who have always stayed focused on their goals and have been consistent in their efforts.”

Consistency was a trait that had eluded me for so long in so many different aspects of my life. I recall there were so many times that I had said I was driven to stay on the right track or that I was more motivated than I had ever been to achieve something great. The drive and motivation I always told myself I had found always seemed to fall short quickly and I was back at square one. This time was different though, I had the greatness that always seemed to elude me within striking distance. Being under 250 pounds by my 25th birthday wasn’t just a pipe dream anymore, it was doable as long as I stayed focused on my goals.

June 26th, 2015 is a day I’ll never forget. I woke up uneasy, I had, for the most part, stayed away from the scale over the preceding two months because I wanted to surprise myself, only slipping up once a week before the big day because I was so very nervous. All I knew on the morning of my birthday was that I was close, very close. I got out of bed that morning and paced around my room for a good ten minutes trying to convince myself that no matter what the scale said I had accomplished something, dropping as much weight as I had was an accomplishment in itself. I told myself over and over again that I was crazy to think that I could get down to 250 in such a short time, that 45 pounds in three months was a ridiculous goal anyways. All the attempts at rationalizing meant nothing though, I had worked my ass off and anything other than success was going to be unacceptable to me. I had experienced what it felt like already to accomplish a goal I had once deemed impossible just that month before and I wanted to experience that again. I made my way to the scale that was tucked away in the bathroom closet, I placed it on the floor, and took a deep breath as I stepped on to it.

March 12, 2015, at about midnight, as usual, I was sitting in my driveway stretching and looking up at the stars, thinking about what was in front of me. Up to this point, I was flirting with a sub-ten-minute mile on a consistent basis but I could never quite get there. I sat there on the asphalt thinking about how the night before I came up 14 seconds short, I thought about how long 14 seconds actually was, maybe if I hadn’t slowed up a bit on the final stretch of that run I would have beaten it, maybe if I had pushed a little harder for just a little bit longer I would have done it. A ten-minute mile again was only a dream for me when I clocked my first mile at 17 minutes. I got up and took a deep breath or seven, hit start on my Nike run app, and off I was. My pace to start was frantic, I was giving it everything I had right off the bat. I had run this exact mile so many times to this point that I knew exactly where all the distance markers were in my head already. I refused to try and check what my time was on the chance that I would risk slowing down even just a little. Half a mile down and I knew I was making good time as I was at the beginning of the second song to play since my run had started. I had put out so much energy already that I was feeling drained and breathing harder than normal. I knew I couldn’t stop, I reached back into that well of never agains that had now been fueling me for months. Never again would I feel not good enough, never again would I be embarrassed about who I was, never again would I doubt what I was capable of, never again would I be my own biggest naysayer. Over and over again I repeated this to myself as I caught a second wind of energy and looking back at it now I wasn’t actually moving that fast but I felt like I was flying. Coming around the corner I knew I was at the home stretch and I could not let up even for a split second. Here I was, someone who at one point couldn’t run more than ten steps without stopping, not because he had to but because in his own head he felt like he needed to, and now I was leaving everything I had out there on the pavement with no intentions of stopping at all. I was at the end now, gasping for air with one hand on my side that had now begun throbbing in agony. I completed the mile and dramatically threw myself down on to the grass trying to catch my breath. “One mile complete, time,,,” time slowed down, I know it’s an app and it's highly unlikely that it was trolling me but it felt like she was taking a lot longer than normal to tell me the results,”… nine minutes and forty-two seconds”. There it was, what I had worked so hard for, the reason I was running so much, what I had desired for so long I had now achieved that goal. I would be lying if I told you I jumped up in excitement, maybe threw in a fist pump or pounded my chest, the truth is I sat there in the grass and I cried. You see, like I’ve said countless times before, I had never set out to do something of this magnitude before and actually saw it through, I was so proud of myself and so unbelievably happy that all I could do was shed some tears of joy. I soaked it in for as long as I could before I realized that a guy sitting in the grass in the middle of the night tears rolling down his cheek was not a good look. I picked myself up off the ground and made my way back inside the house.

June 26th, 2015 I was standing on that scale with my eyes closed as nervous as I had ever been. I stepped off still with my eyes closed knowing that there was no way to avoid seeing what I weighed in at but to open my eyes and turn off the scale. I finally mustered up the courage to open my eyes and look down, this time there were no tears, this time there was a couple of aggressive fist pumps and a lot of chest pounding. Two hundred and forty-eight pounds is what I read. I had done it, I had achieved my goal, I was the lightest I had been since high school and 82 pounds lighter than I had been when I started this thing. I was no longer that shell of a person who couldn’t stand his own reflection, I was now on top of that hill that I set out to scale. I was on top of the world, but I wasn’t satisfied. I had more work to do. I set my sights high again, my next goal was to drop under 200 lbs, and there was nothing that could stop me, but for the day I was going to reward myself on my birthday with a lot of pizza and get back to being consistent on June 27th.